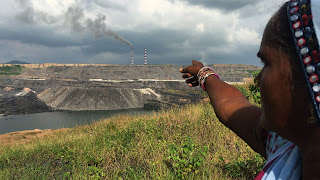 Agar Wo Desh Banati/ If She Built A Country
by Maheen Mirza
Produced by PSBT
(60 mins. | Hindi and Chhattisgarhi with English subtitles | 2018)

The film will be followed by a discussion.

ABOUT THE FILM: Rural, Adivasi women from the villages of Raigarh, Chhattisgarh critique the grand plan of development of the country. As mines and power plants appear and grow in monstrous proportions around them, many of them have been cheated of their land and compensation. As they grapple with all this, they seek justice for themselves and their communities and share their thoughts about how the development of a country should be.

ABOUT THE FILM MAKER: Maheen Mirza is a cinematographer and has worked with several organisations and peoples’ movements on socio-political and educational issues and has made fiction and documentary films across the country. She is a part of Ektara collective, a strong proponent of the independent cinema movement that seeks to build inclusive and collective cultural spaces. She has been a part of the scripting and cinematography of Jaadui Machchi and Turup among others.

ABOUT THE PRODUCER: The Public Service Broadcasting Trust (2000) is a pioneering non-governmental, not-for-profit organisation based in New Delhi, that commissions, mentors and produces independent documentary films.

ABOUT THE KRITI FILM CLUB: This is an educational initiative of a not-for-profit organisation 'Kriti team'. We screen and share documentary films on development, environment and socially relevant issues, in an effort to positively influence mindsets and behaviour towards creating an equitous, just and peaceful world. We also curate issue based film festivals and organise documentary film shows in neighbourhoods, communities, schools, colleges or institutions on request and otherwise. The Kriti Film Club has been screening documentaries regularly and independently (without any funding) in Delhi NCR since 2000 and in Mumbai since 2019, to promote 'thought-provoking cinema'.