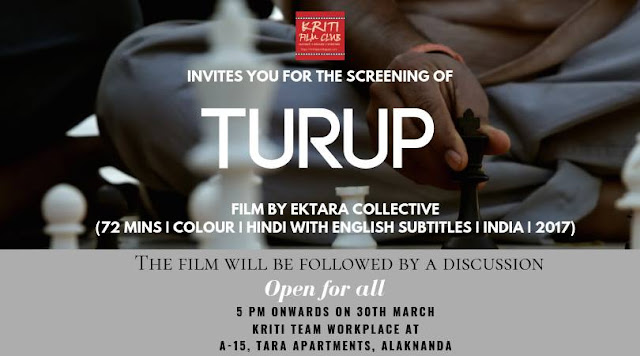 About the Film: Chess is a popular pastime in this neighbourhood in Bhopal, with roadside games bringing together men to challenge each other in friendly and sometimes unfriendly matches. But for some, the pawns include morality and religion, causing tensions to erupt when a tournament gets underway. Against this backdrop, a domestic worker with a secret hobby, a former journalist struggling with married life and a young woman in love, all find themselves pushing boundaries and challenging the rules of the game.

Turup was made as part of a collective process by Ektara Collective over the course of a year – along with the residents of different working class settlements in Bhopal, Madhya Pradesh. All of the cast and much of the crew were from the settlements. Other technical and non-technical people came from across the country to become a part of the film. The process was a collaborative and evolving one, where ideas about the script, dialogues, shoot, edit, and music were shared and discussed. Each person involved has contributed her/his own unique vision, skill and perspective to the film.

About the Filmmakers: Ektara Collective is an independent, autonomous, non-funded group of people who seek to combine creative efforts and imagination, collaborating with trained and untrained people to make films that are content-wise and aesthetically located in people’s subjective, contextual realities and experiences. Through this process Ektara has earlier produced the short fiction films Chanda Ke Joote (22 min, 2011) and Jaadui Machchi (38 min, 2013). This is their first fiction feature film.

About the Kriti Film Club: This is an educational initiative of a not-for-profit organisation 'Kriti team'. The Kriti Film Club screens and shares documentary films on development, environment and socially relevant issues, in an effort to influence mindsets and behaviour towards an equitous, just and peaceful world. It also curates issue based film festivals and organises neighbourhood, school, college or institutional film shows. The Kriti Film Club has been screening documentaries regularly and independently since 2000 to promote 'thought-provoking cinema'.

Open for All. The space is wheelchair and disabled friendly.
Confirmations would be appreciated on space.kriti@gmail.com