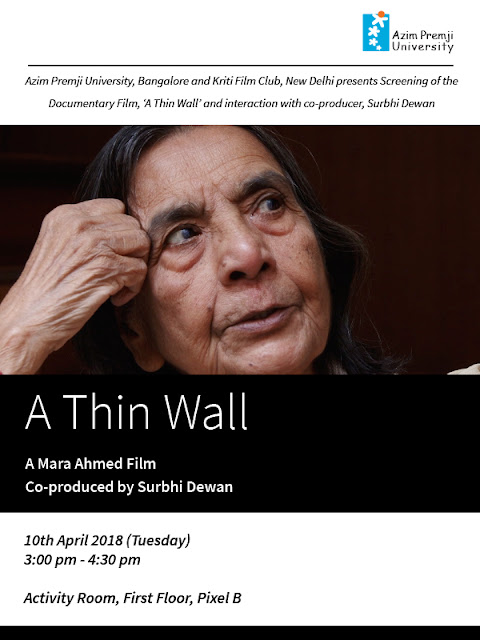 Title: A Thin Wall
Director: Mara Ahmed
Co-Producer: Surbhi Dewan
Date: April 10, 2018 (Tuesday)
Time: 3.00 to 4.30 pm
Venue: Activity Room, First Floor, Pixel B, Azim Premji University, PES Institute of Technology Campus, Hosur Road, Bangalore
About the Documentary Film
A Thin Wall is a documentary about memory, history and the possibility of reconciliation. It focuses on the partition of India in 1947, but derives lessons that remain urgently relevant today. Shot on both sides of the border, in India and Pakistan, A Thin Wall is a personal take on Partition rooted in stories passed down from one generation to another. It is written and directed by Mara Ahmed and co-produced by Surbhi Dewan. Both filmmakers are descendants of families torn apart by Partition. The film is also a work of art infused with original animation, music and literary writing.
About the Speaker
Surbhi Dewan is an independent film maker. Her films connect personal portraits to larger socio-political landscapes. She has produced a number of short creative documentaries that have been showcased in film festivals across the world. Surbhi graduated with an MFA in film from Rochester Institute of Technology, New York, and received her BA degree in Political Science from Lady Shri Ram College, New Delhi.
About the Kriti Film Club
The Kriti Film Club is an educational initiative of a not-for-profit organisation 'Kriti team'. It screens and shares documentary films on development, environment and socially relevant issues, in an effort to influence mindsets and behaviour towards an equitous, just and peaceful world. It also curates issue based film festivals and organises neighbourhood, school, college or institutional film shows. The Kriti Film Club has been screening regularly and independently since 2000 to promote thought-provoking cinema.
Reactions: