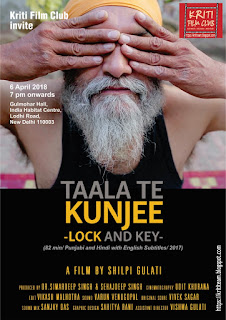 The film will be followed by a discussion with the film maker.

About the film: Four recovering addicts at a rehabilitation centre in Punjab are helping families recover from the rampant drug problem in the state. While they struggle to establish new relationships with their pasts, their wives strive to redefine the meaning of love. An intimate portrayal of recovery, 'Taala Te Kunjee' is about relationships and the labour of everyday.

About the film maker: Shilpi Gulati's body of work largely engages with gender, identity and oral narratives of regional communities in India. While her independent projects ‘Dere tun Dilli’ (2012) and Inside Out (2010) have been screened at various festivals across South Asia, her last film ‘Qissa-e Parsi’ won her the National Award in 2015. She is currently pursuing her PhD from Jawaharlal Nehru University, New Delhi.

About the film club: The Kriti Film Club is an educational initiative of a not-for-profit organisation 'Kriti team'. It screens and shares documentary films on development, environment and socially relevant issues, in an effort to influence mindsets and behaviour towards an equitous, just and peaceful world. It also curates issue based film festivals and organises neighbourhood, school, college or institutional film shows. The Kriti Film Club has been screening regularly and independently since 2000.

Thank you to India Habitat Centre for the collaboration.