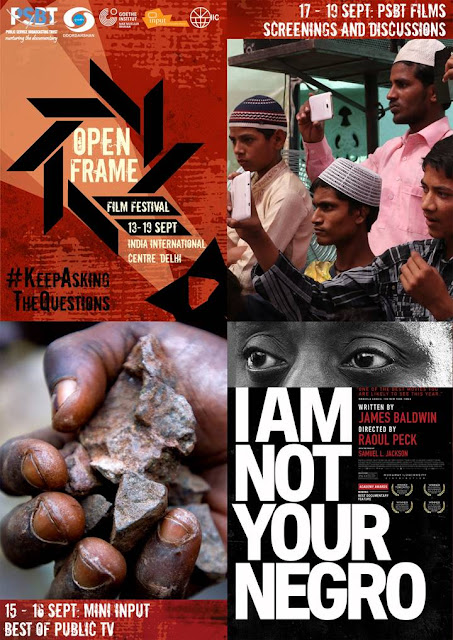 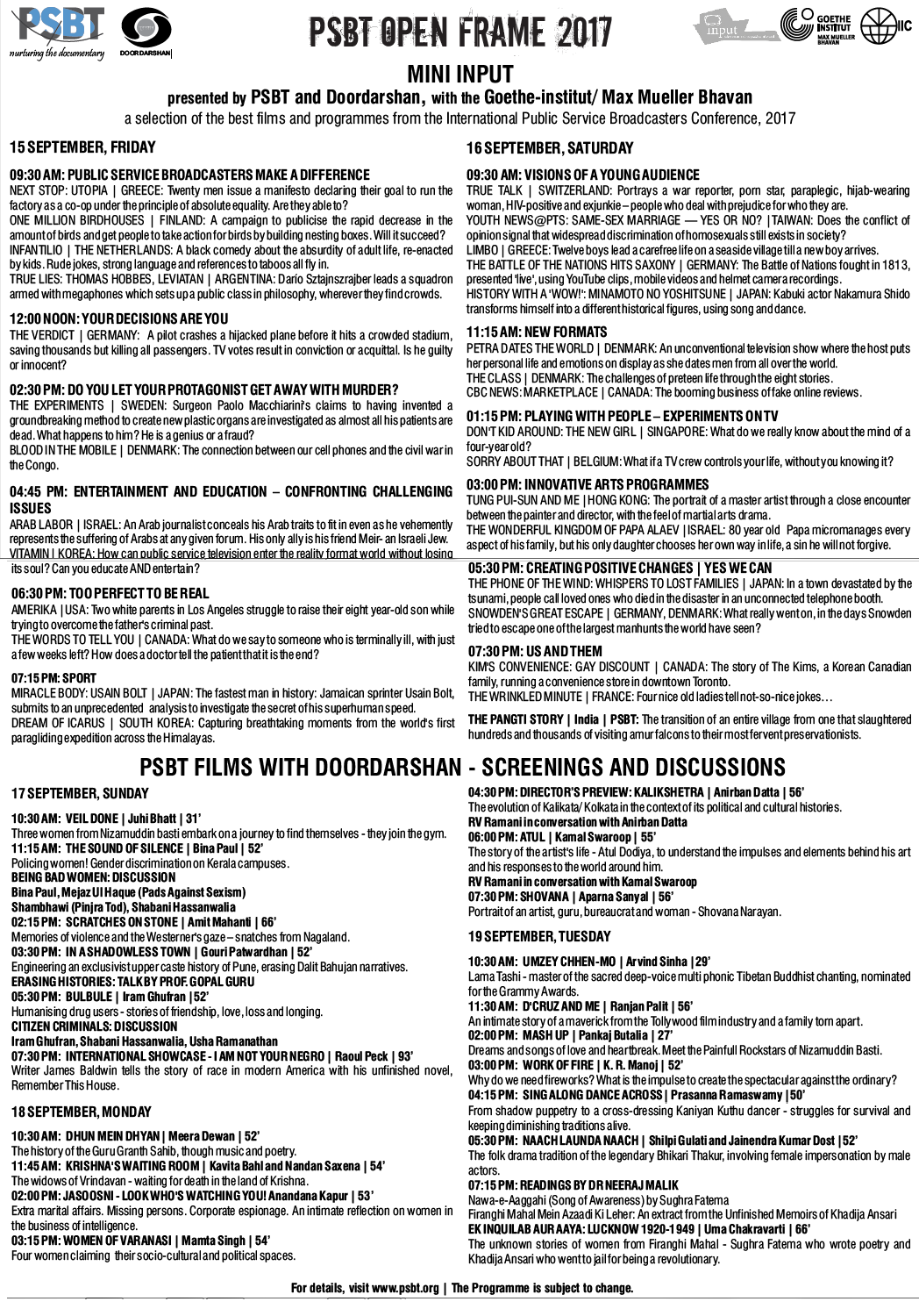 PSBT’s Open Frame 2017 is about asking questions and expanding the discourse around both – the documentary film form and the unfolding socio-political realities in which documentaries are produced. The Festival will engage with image-making and documentary films as creative pursuits, modes of expression and enquiry, intervention strategies for social change, powerful alternatives to dominant visions, voices of the marginalised and disenfranchised and manifestations of independent art practice.
Through the programming this year, we emphasise the need to keep asking questions, of ourselves and others, and being open to new ways of looking, listening and believing. Questions are instruments and agents of comment, empathy, support, subversion and change. They deepen and enrich our understanding of the world and allow us to hear voices other than our own. The power to transform is inherent to the practice of asking questions. It introduces us to the dynamism and diversity of people, ideas, praxis, possibilities, histories and stories. It signifies unlearning as much as it is about learning. It is questions, often the simplest ones, which catalyse the biggest movements and moments for affirmative and progressive change, stimulate constructive conversations, allow the expression of solidarities, disrupt existing power structures, critique our privileges and entitlements, make power accountable, and train us in being accepting and welcoming of difference. Asking questions is as much our responsibility as it is our prerogative, in making sense of our worlds. #KeepAskingTheQuestions!
On 13 and 14 September, we present Workshops on Documentary Filmmaking, which address the multiple and fluid meanings of documentaries and how to creatively employ them to tell stories.
On 15 and 16 September, in partnership with Doordarshan, INPUT and the Goethe-Institut/ Max Mueller Bhavan, Delhi, we present a special package of some of the best films and programmes from the International Public Service Broadcasters’ Conference, Greece, 2017. The event examines the role of public broadcasting, and the media at large, in initiating dialogue, forming opinions, knowledge creation, development communication and affecting change.
As a special international showcase, we will screen the multiple award winning and Oscar nominated I am Not Your Negro by Raoul Peck, which raises questions about race in modern America, challenging the very definition of what the country stands for.
Between 17 and 19 September, we screen a selection of PSBT films on a range of themes, which present before us critical questions and compel us to consider: why women should have lesser freedom, choice and independence than men? Why should those who reclaim their spaces be bad women? Why are some people lesser citizens than others? How are histories created, recorded and invented? Are drug users criminals and morally corrupt persons? What are the experiences of widows by the banks of the Ganga who live only to wait upon their deaths? How do caste, class and gender politics affect our everyday lives and shape our attitudes and perceptions? How does one deal with the scars of violence and internalised trauma? What are the ways in which hegemonic narratives replace the diverse stories of people? How is art a means of political expression? How do landscapes bear the stamps of their pasts and produce a metamorphosis of the present? How does one use music as sacred prayer, as livelihood or for mending a broken heart? Why do we need to keep old traditions alive and how do we sustain those struggles? Why does some art get hierarchised as inferior and vulgar? How and why must we preserve subaltern art traditions and other forms of expression?
Aiding film screenings will be conversations with filmmakers and other guests. We will have Prof. Gopal Guru talk about ERASING HISTORIES in the context of exclusivist versions of history in the city of Pune, based on the erasure of Dalit Bahujan narratives; Usha Ramanathan talk about CITIZEN CRIMINALS, addressing the ideas of drug use, criminality, morality and the law; BEING BAD WOMEN: a discussion with participating filmmakers and students representatives from Pinjra Tod and Pads Against Sexism Campaigns against moral policing and harassment of women; CONVERSATIONS between eminent filmmakers RV Ramani and Kamal Swaroop and Anirban Datta about their films ATUL and KALIKSHETRA, respectively.
We will also host the premiere of our film SHOVANA – a film on the eminent dancer and Guru Shovana Narayan, directed by Aparna Sanyal. We close with Dr Neeraj Malik reading poetry by Sughra Fatema and extracts from the memoirs of Khadija Ansari – women from the 17th century Firanghi Mahal, Lucknow, followed by Uma Chakravarti’s film – EK INQUILAB AUR AAYA: LUCKNOW 1920-49, on the two women and their struggles and journeys through radical, tumultuous times.