India International Centre Film Club and GraFTII North (alumni body of Film and Television Institute of India) in collaboration with the Directorate of Film Festivals and NFDC – Cinemas of India will present a retrospective on the celebrated actor and alumuni of FTII, Om Puri.

Entry to the screenings is open to IIC members, IIC Film Club Associate members and invitees of the collaborating organisations

A SELECTION OF FILMS OF OM PURI

One of the finest Indian actors and one of the few from India who straddled multiple film spaces - from Bollywood to Indian art house indies, British Asian immigrant stories and big Hollywood productions. Puri acted in over 300 film projects in India and abroad. He won two National Awards in India in the acting category (Arohan, 1982 and Ardh Satya, 1983), and was recognised at a number of film festivals, including a lifetime achievement medal at the prestigious Telluride Film Festival.
Puri was one of the most versatile Indian actors and his comic timing was perfect as can be seen in the cult classic Jaane Bhi Do Yaaro (1983); or portraying a sleazy photographer in Shyam Benegal's Mandi (1983), and later on in Vishal Bhardwaj's Maqbool, where Puri played one of the witches, along with his colleague and friend Naseeruddin Shah. He was the voice of an angry, frustrated cop in Ardh Satya (1983), but was equally charming and seductive with his co-star, the late Smita Patil. And in Aakrosh (1980) he was the oppressed peasant who barely uttered a word.
Om Puri has left a huge body of work reflecting his four decades as a film actor par excellence 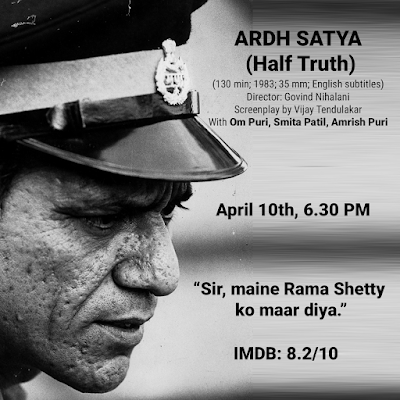 A proud cop hoping to change the world soon realizes that he is a mere pawn in the larger game of corruption, power, politics and crime. He struggles with the evils around him and his own vulnerabilities. The honest cop’s life goes into a downward spiral and he has to seek assistance from a corrupt politician.
Om Puri plays the honest cop Anant Welankar in the movie and puts the character’s struggles into perspective in one pivotal scene in the film where he reads a poem from a book named Ardh Satya 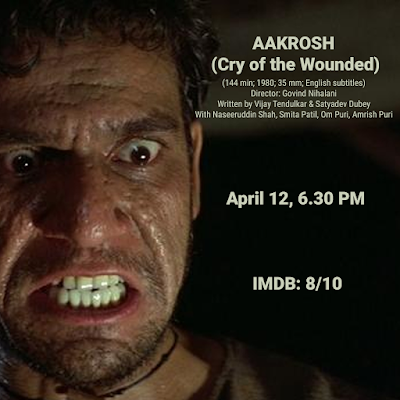 Allegedly based on a true incident reported on page 7 of a local newspaper, the film was a scathing satire on the corruption in the judicial system and the victimization of the underprivileged by the able and the powerful. Aakrosh forms a part of the series of works, based around explorations in violence, written by noted playwright Vijay Tendulkar, who had earlier written Shyam Benegal’s Nishant (1974) and went to write Govind Nihalani's next surprise breakaway hit, Ardh Satya (1983).
Here the victim is shown so traumatized by excessive oppression and violation of his humanity, that he does not utter a single word almost for the length of the film and only bears a stunned look, though later he uses the same violence as a tool to express his own sense of violation and rage
■ C.D. DESHMUKH AUDITORIUM AT 18:30 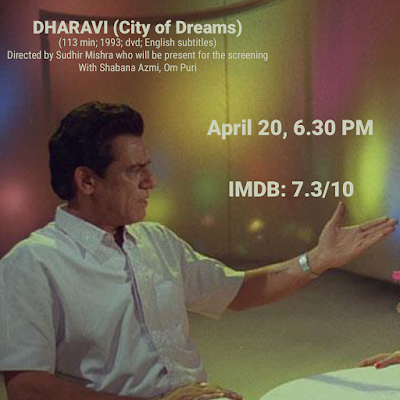 DHARAVI (City of Dreams)
(113 min; 1993; dvd; English subtitles)
Directed by Sudhir Mishra who will be present for the screening
With Shabana Azmi, Om Puri

This gritty film by Sudhir Mishra offers a window into life in the titular Bombay slum. A harrowing yet compelling tale of defeat and loss, Rajkaran (Om Puri) is a cab-driver living in a tidy, one-room Dharavi shack with his mother, his wife Kumud (Shabana Azmi), and their son. Rajkaran yearns for success in business and a better life; he is gathering funds to buy a small cloth-dying factory. When one of his partners pulls out unexpectedly, Rajkaran reluctantly accepts a loan from the local underworld boss Tiravi, whose goons are suspected to be behind any number of neighborhood beatings and murders. Now indebted to Tiravi, Rajkaran finds himself drawn into ever more shady dealings, to the despair of Kumud, whose brother dared to stand up to Tiravi's tyrrany and was murdered for it. Kumud finds solace in the peaceful company of her first husband Shankar, with whom she had parted ways years before, and who has returned to Dharavi helpless and partially paralyzed after suffering a stroke. On the verge of losing his livelihood and alienating his family, Rajkaran grows ever more desperate... 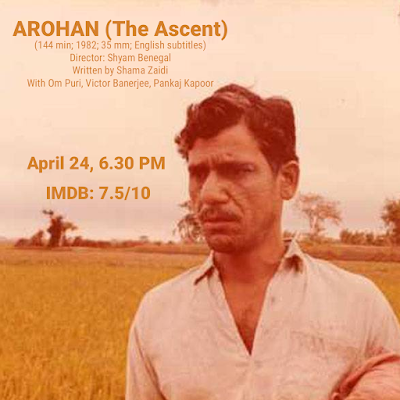 Hari Mondal (Om Puri) is a poor village farmer who lives in the remote Bengal village of Giripur in Birbhum district with his wife, two sons, brother, an old widowed aunt Kalidashi and her daughter Panchi. The film opens in the mid-sixties when the Naxalbari uprising is spreading across Bengal and oppressed farmers are being united by youths who believe in communism and a socialist republic. Hari and his brother Bolai are Borgadars, land tillers who plough and harvest the crop on land owned by Jotdars. Bibhutibhushan Ganguly (Victor Banerjee) is the young jotdar who has just lost his father and now wishes to employ new laws on his Borgadars ensuring his greatest profit while the poor farmer languishes in poverty. His estate agent Karmakar does most of his dirty dealings on his behalf that include keeping the poor villagers scared and in command. Hari's sister is about to get married and Hari asks Bibhutibhushan for a loan.
Arohan is among Shyam Benegal's lesser known and underrated works. Hari Mondal is among the most memorable characters. A good hard-working man trying to provide for his family but too naive and gullible for his own good. 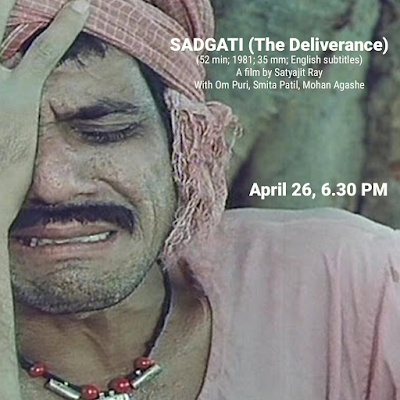 A made-for-TV drama that was written, scored, and directed by Satyajit Ray. The film is a vicious indictment of the Indian caste system; when a poor and out-caste, village shoemaker, Dukhi (Om Puri), goes to a village Brahmin (Mohan Agashe) to get the date of his daughter's marriage fixed, the Brahmin in turn asks for labour without pay in exchange, the ensuing events however turn the table against the priest, who in the end has to fore-go all the lofty tradition, including that of untouchability, he held so dearly, all this life, in his life as village priest.
Ray’s script is based on Munshi Premchand’s short story "Sadgati" that was first published in 1931, and it follows Premchand’s story quite closely. 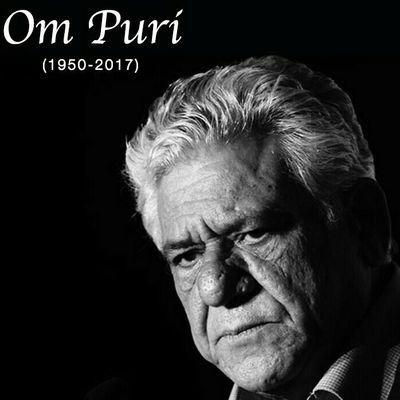